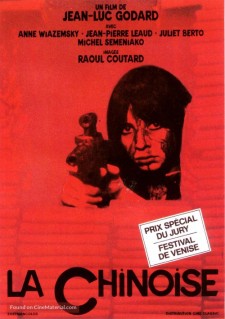 I’m not smart enough, nor do I know enough about politics and history, to keep up with this film. So, whether this be a genuine critical response, or an expression of ignorance, I didn’t like this movie.

La Chinoise, or The Chinese, is a barrage of endless political commentary and pure Godardian filmmaking rife with rule breaking which produces a unique kind of cinema that, though it is striking, is very tiring and largely little more than an expression of experimentation, not really a lasting form of film, nor something I’d like to see again (certainly not mimicked to produce other original films). And I think that is the biggest downfall of many of Godard’s films; they are unique, but you wouldn’t want to see a genre of films flourish from them, leaving them, in certain senses, throw-away experiments and a mere distraction from traditional, evolving forms of narrative cinema.

The more I reluctantly burrow into Godard’s filmography, the more averse I become to his filmmaking. Maybe one day I’ll find something of his I like.

Los Olvidados (a.k.a The Young And The Damned) is considered a Latin American masterpiece, understandably so, and is a devastating social tragedy. It is a parable about the cyclical nature of poverty, one that is attached to all people in a hierarchical society who do not assume both responsibility and patience. But, in constructing such a poignant tale, Buñuel never really uses direct social commentary, rather, he documents a narrative that is supposed to be viewed as truth (though it is obviously construed based on true events) which we cannot help but invest in and ruminate upon.

The blend and balance of realism, surrealism, symbolism, character and plot in this narrative is then perfect, leaving this film a true mark of a master. If you haven’t seen this film, certainly give it a go.

Killer Of Sheep is simple, yet brilliant. It loosely follows a struggling husband, depicting both his daily challenges as well as those belonging to (sometimes stemming from) the network characters that surround and are connected to him in his working-class town. Without having a strong sense of a plot, or even much of a narrative focus, Killer Of Sheep is then an ingenious piece of realism that blends documentary and fiction incredibly well.

Beautifully shot with such a tremendous sense of life and verisimilitude, this is ultimately a great movie, subtle, muted and perfectly reserved.

I’ve only seen this film two times, so I don’t think I’ve got the subtext fully figured out, but Harvey is seemingly partly a critique of psychological institutions, partly a commentary on the callousness of the average individual and partly a romanticisation of a drunkard.

However, what I am certain of is this film’s uncanny sense of heart and warmth, its brilliant writing and the tremendous performance of Jimmy Stewart. This all comes together to produce a strange tale primarily about acceptance and kindness – a simple idea executed perfectly. And in such, Harvey is one of the purest Hollywood classics you’ll ever be able to find as it is irrefutably a narrative trapped in a bygone era, one that captures its greatest elements as a form of family entertainment astoundingly.

All in all, Harvey is a perfect movie that I seriously couldn’t understand anyone disliking.

Dracula is an obvious and lasting classic. It is an incredibly striking film with terrific mise en scene, lighting and, most of all, set-design. This then brings to life the stage-play, from which this was very clearly adapted from, quite well – though, there are many lost opportunities in which a cinematic approach could have stepped in (transformations in particular). The direction is ok, but it seems Browning made this film to be a blend of a silent film and a stage play, and his use of montage makes this obvious, so, again, this doesn’t feel like a very cinematic film and so suffers somewhat from that.

Beyond this, I unfortunately didn’t have a good time with Dracula. I wish I had seen the version with the added score as the sound design in the original is incredibly lacking, leaving a voidal and static atmosphere to imbue the narrative with a very awkward tone. I am, however, interested in seeing this film again as the use of archetypal characters really drew me into the story – one which think has a bit more to it below its surface.

Hunt For The Wilderpeople is a fun and quirky on-the-run adventure movie. It is full of playful direction and brilliant writing, but sometimes the structure and the edit fail to control the movie’s comedic contrast of realism and fantasy which leaves a few sequences silly – and not in a good way. Moreover, whilst the direction is playful and does provide some small bits of ingenuous (though never entirely original) design, it sometimes looses focus, reducing some of the cinematic language to pretty bland spectacle that most YouTubers with drones and Final Cut pro will squeeze out of their Macs.

The most surprising element of this narrative were the two central performances which, though they weren’t technically perfect, were a brilliant match for this idiosyncratic narrative. So, whilst this is a bit dumb and ill-designed at some points, Hunt For The Wilderpeople was a good watch and just one of those movies you’re kind of glad exists.

Repo Man is a surreal and absurd, even anarchistic, look at a nihilistic 80s America. In such, it confronts themes of governmental conspiracy, religion, crime and capitalism in a shifting culture with alienating and dizzying sensibilities.

I haven’t got a full grip on all that Repo Man explores, but one things is sure on this first watch; this is a witty and incredibly daring film that builds its insane world pretty well. The only weak element of this film is then its final act which, though it is supposed to devolve into absurdity, is edited in a manner that doesn’t emphasise the now obvious surreal undertones of the first two acts, instead, makes them silly. However, it could be argued that this is justified and intentional. Nonetheless, this was jarring – and not in the best of ways.

Beyond this, Repo Man was quite fun and a technically competent movie. Highly recommended.

Nosferatu is an aesthetic masterpiece of silent cinema, and there’s no question of that, thanks to Murnau’s application of German Expressionism which imbues this narrative with such a rich and sable atmosphere, one that drips with sinister darkness and malevolent shadows.

The story is light and quite uninteresting, but Stoker’s book never kept me too riveted–and neither has any other adaptation of Dracula. However, beyond the plot, there is an implicit depth that seems to be lingering in the subtext of most Dracula adaptations. With Nosferatu, this is linked to disease as well as relationships, providing an alternate subtext to the 30s Dracula (which is undoubtedly inferior to this). But, it’ll take another watch before I’m confident of exactly what Nosferatu has to say.

All in all, Nosferatu is certainly worth the watch for the aesthetics – especially those in its second half. Another masterpiece from Murnau. 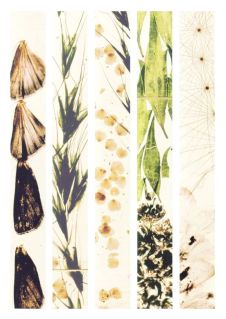 Mothlight. A simple short film that asks a question that, now we are in the digital age, can’t really be asked anymore – at least not in the same manner. Through this short, Brakhage asks “What can be film?”. In asking this, he questions the literal material of celluloid and what can go on it. Is light’s impact in chemicals the only means through which cinema can communicate? Is cinema only captured with a movie camera?

Though there hasn’t been extensive experimentation in this field, Brakhage’s experimental film plays with the plasticity of cinema as an art, providing a non-narrative spectacle of light as filtered through moth wings. This is then a weird ‘film’ that asks an interesting question and so is certainly worth a watch.

Words can’t do this justice, but… Steamboat Bill, Jr. is simply incredible.

Not only does Keaton provide his stone-faced slap-stick brilliantly, but the focus on narrative in this film is surprisingly strong. In such, Steamboat Bill, Jr. works so incredibly well thanks to its exploration of father-son relationships as well as the themes of alienation and failure attached to that relationship. Combining this with the age-old tale of torn young love, this narrative really adds dimension to the spectacle that we all know this to be.

But, on that note, it cannot be overstated just how brilliant the final set-piece is. The icon of Keaton standing in that fallen house front, however over-used, is something that undoubtedly represents a height of cinema that virtually no entertainer has ever really reached before or after Keaton.

It can be said a million times over and it will still be true: a masterpiece.

The Seventh Seal – Truth And Lies